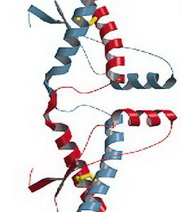 Biospirál-2006 Kft. was founded in 2006 as a spin-off enterprise by researchers of the Szeged Biological Research Centre of the Hungarian Academy of Sciences. The primary activities of the company are R+D and the provision of biotechnological services. The main profile of Biospirál is the development of novel methods to be used in the diagnostics and treatment of neurodegenerative diseases induced by protein conformation change. The technology applied by Biospirál is based on the scientific achievements of the Szeged Biological Research Centre’s protein conformation disease research team. The company aims to develop these novel methods into marketable technologies.

During its activities thus far, the company has established cooperation and has launched joint projects with university faculties, academic institutions and research teams of the Cooperative Research Centers.  Biospirál-2006 Kft. also creates molecular biological material, recombinant and specific proteins, and fluorescent marker expressing cell lines both for internal use and sale.

The company’s management structure was transformed in 2011 with the appointment of Ágnes Gulyás as Executive Director. Since then, the company has seen a consistent and rapid growth, extended its product range, and has been awarded multiple grants both independently and as part of consortiums, allowing it to further develop its facilities.